The #3 Porter Beer in America is at the Best New Brewery in Illinois, according to Paste Magazine and RateBeer.com, respectively. Richie also has a 96 rating by Ratebeer.com, and so does Municipal India Pale. 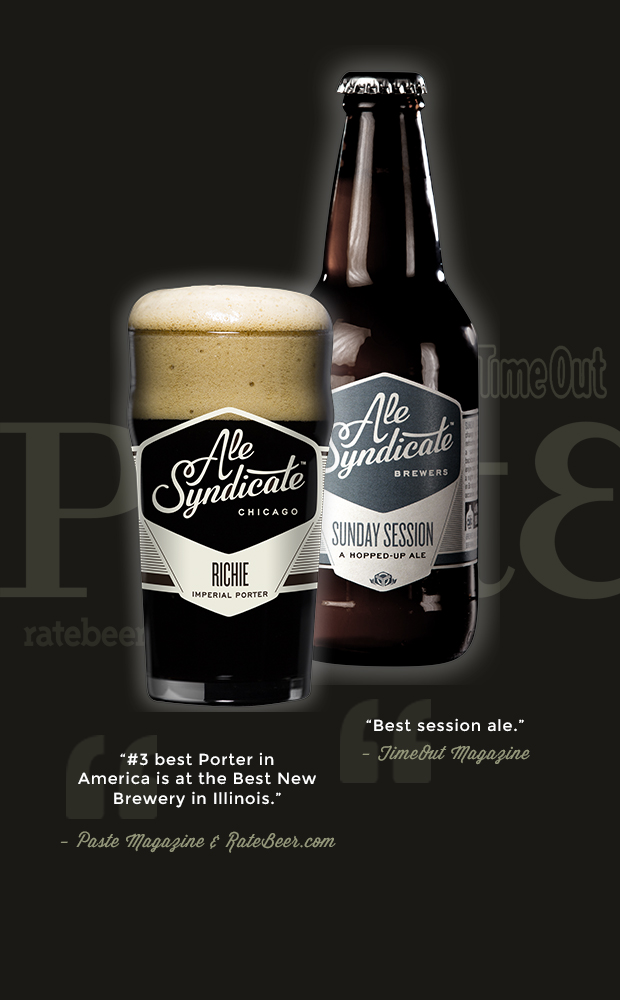 Chicagoans and beer lovers, meet Ale Syndicate Brewers, maker of the award-winning Richie Imperial Porter. Oh, and let’s not forget our most popular beer, Sunday Session, which was rated as the best session ale by TimeOut Magazine.

At Ale Syndicate, we make craft beer that’s distinctly Chicago — craft beer worthy of Chicagoans, people who work hard, celebrate harder, and never shy away from a challenge. We are the heartbeat of America, and we’re committed to bringing you beer equally as integral to the fabric of our country.

Inspired by our city, we believe in strong flavors, pure ingredients, and the power of coming together around something we love.

All our success has led to expansion throughout the entire state of Illinois, multiple partnerships with local Chicago establishments, and soon, we’ll be spreading Chicago-born beer to our neighbors in Indiana, Michigan, Ohio, and Wisconsin.

This simply won’t do. When the Greatest City in the World can’t get the craft beer they deserve, something needs to be done. 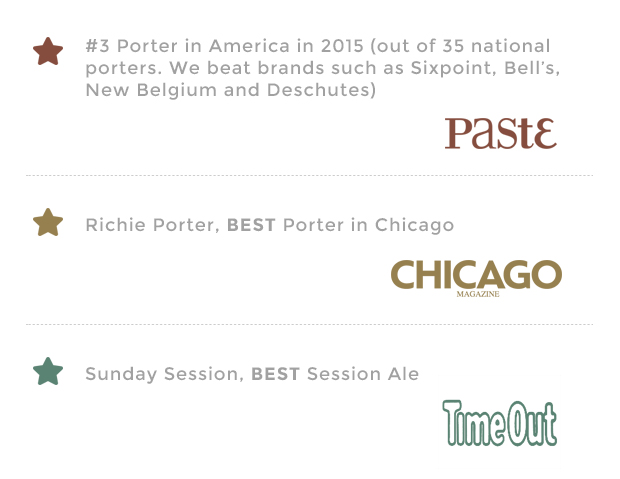 All told, we brew 4 regular recipes and 12 specialty drafts.

Just like our city, none of our beers are over the top — we focus on balance, quality, and approachability in our creations. This simple approach creates beers that resonate with the highest end restaurants to the diviest of bars.

From 2013-2014, Ale Syndicate strictly sold in Chicago and its surrounding suburbs.Over 700 bars, restaurants, and stores in Chicago carry our award-winning brews. In 2015, we are proud to launch statewide. By the end of 2016, we will target parts of Indiana and Michigan, and as demand and production allow, Ohio and Wisconsin as well.

As part of our statewide expansion, as of March 2015, Ale Syndicate can be found in over 130 Jewel grocery locations. 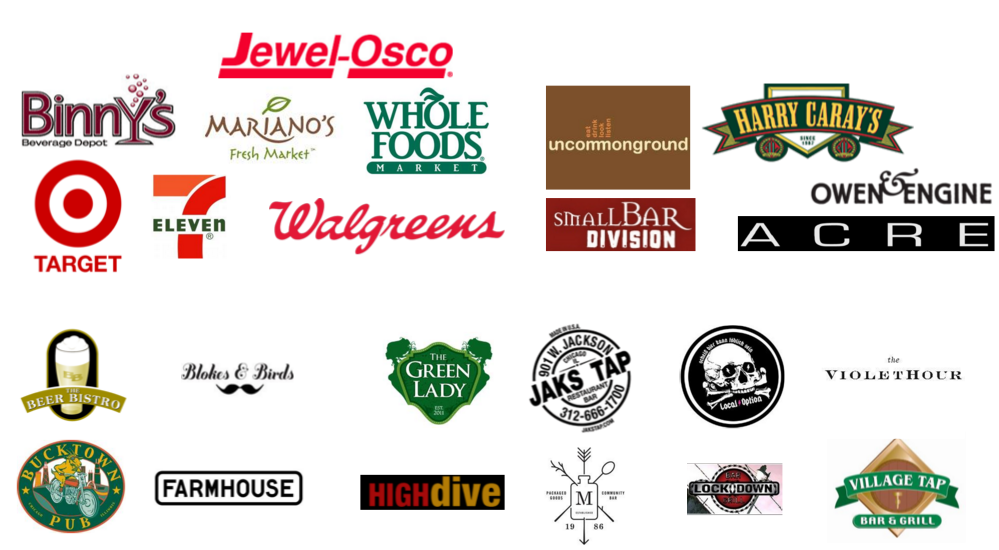 We also create create custom beers on demand for some of Chicago’s hottest brands: Harry Caray’s Tavern, Park Grill at Millennium Park, Ritz Carlton Chicago, and One North Kitchen among others. 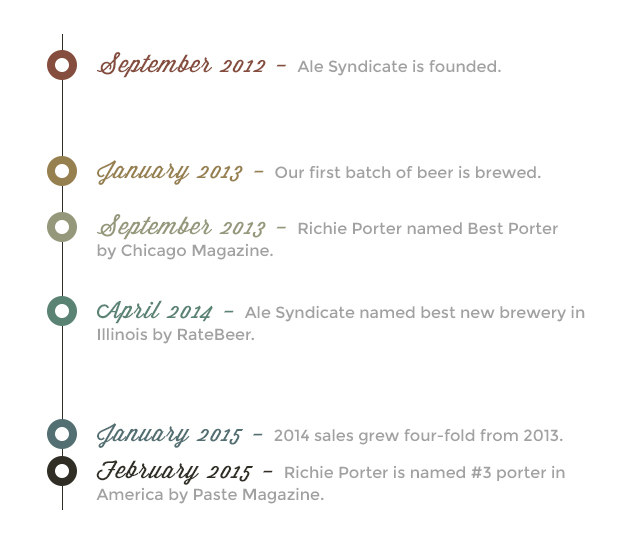 We’ve also created an iced coffee through a partnership with Metropolis Coffee Roasters and will soon be putting up a 25 foot sign right of the Kennedy Expressway by O’hare and Downtown Chicago. Every day, 285,000 people will drive by this sign, creating huge brand recognition.

Our real strength, however, lies in our distributor, Lakeshore Beverage. The largest beverage distributor in Illinois, Lakeshore is the same company that distributes all Anheuser-Busch products, including Budweiser, in the Chicagoland area. With their 200 person sales team, dedicated brand manager, and large account base in targeted craft beer markets, they’re able to capture key retail shelf space

All told, we’re producing roughly 720 gallons of beer 3 times a day, but we’re almost at capacity. To keep providing the great people of Chicago with our beer, we need to build a warehouse and taproom that will allow us to brew more and even welcome people into our doors for tours and event space.

The Ale Syndicate team has deep knowledge and proven talent in the craft beer space. We spent years homebrewing and got really good at it.

One day, we were offered the chance of a lifetime: to start our own brewery, making the only bottled craft beer in Oakland, California. It pained us to leave our beloved Chicago, but this was an opportunity we couldn’t pass up.

Lucky Hand Brewery was a huge hit — our beer took off and stores kept selling out. But something was missing — Chicago. We missed just about everything about Chicago: the toughness, the skyline, the winter, even the rust. We missed the spirit of audaciousness that is uniquely Chicago — a drive to do big things.

We considered bringing our beer to Chicago, but the beer we were making was distinctively California. Chicago deserved something bolder and stronger.

So, we sold our homebrewing equipment and our stake in the company. We bought a pickup truck and jumped on Route 66 headed east.

From a really young age, Jesse had a starry-eyed love affair with the City of Chicago. While not born there and having lived in many places, Jesse considers himself a Chicagoan and is always ready to defend it as the Greatest City on Earth. He likes Chicago politics, the strength of its architecture, its spirit of industriousness and the sheer audacity of folks who live here. Any city that can build on swamps, become the center of the nation, get burned down and do it all over again is good in his book. Jesse lives his life according to Daniel Burnham’s inspiration to Chicago “to make no little plans.”

Jesse has a BA from the University of Illinois and a background in design, winemaking, and sales. As CEO, he is responsible for all business administration, brand development, and strategy.

After working in merchandising and distribution at Pepsi-Cola in Illinois, Samuel moved out to California for a few years where he co-founded Lucky Hand Brewing Company with his brother. When he isn’t busy brewing, Samuel can be found outside camping with friends and his dog, enjoying the natural beauty of places like Starved Rock. As an amateur guitarist and avid local music fan, Samuel hopes to bridge his three loves: music, beer, and Chicago.

Samuel also has a BA from the University of Illinois and a background in marketing, design, and logistics. As COO, he is responsible for all operations and facility management.

Byron started brewing professionally in 2012 and has led a very beer-focused life ever since. Taking over the brewhouse for Ale Syndicate in January 2015, he is very excited to brew favorites like Municipal and Sunday Session but has a few new recipes up his sleeve as well. Growing up in the western suburbs, he loves living in the city now, due in no small part to the amazing variety of culinary options. From tacos to pho, as long as it’s tasty, he won’t play favorites.

Richard’s passion for beer was not born in a bottle, but with a gift: a home brewing kit from his wife. Though originally hailing from the Detroit area, Richard has been immersed in the Chicago brewing community, and has loved being on the front lines of the exploding craft brewing scene. He loves spending time with his daughter and catching up on sleep. Among his hobbies, Richard collects music (especially 1970s African funk), wears his geek badge proudly (he really wants to know what happens next in Game of Thrones without reading about it), and avoids haircuts so he can work on rockin’ a mad wafro.

Carlos oversees all our marketing and sales efforts.

Summary:
The #3 Porter Beer in America is at the Best New Brewery in Illinois, according to Paste Magazine and RateBeer.com, respectively. Richie also has a 96 rating by Ratebeer.com, and so does Municipal India Pale.