You are here: Home  /  icnw  /  Braci: Sound recognition platform allowing users to turn sounds from their environments into notifications Braci has developed a technology solution capable of detecting a wide range of sounds which can then be pushed as easily understood sensory and visual notifications through smart devices back to the wearer/user.

Braci functions through recognizing and analyzing sounds from the environment and converting these into vibrations, on-screen notifications, and flashing lights which can be displayed on a smartphone, smartwatch or other portable device.

This offers the opportunity for both customers (typically B2B procurers such as Local Authorities) and their end-users to benefit from cheaper devices, more portable devices and upgradable devices than those (traditionally hard-wired, ‘old-technology’) currently in operation in this market. At present, Braci has created a set of mobile applications for both iOS and Android that incorporate its own technology. These can be connected to other products for an extra form of notification, including wearable and non-wearable smart devices (Pebble Smart-watches, Android wears, Google Glasses, Smart TV’s and many more).

Our first MVP is the Hearing Assistant, which includes features that would help a hard of hearing or deaf person in their daily activities. It can be used to get notifications of safety (emergency sounds such as fire alarms) and comfort (environmental sounds such as doorbells) sounds.

People who are not hard of hearing could also use this application if they were too distant from the origin of the sound, for example using headphones or in a hurry (for example walking whilst using their mobile phone and deep in thought).

The core technology lies within a series of proprietary algorithms which function by continuously listening, 24 hours a day, to sounds using the microphones built into most smart devices (for example mobile phones).

Braci’s technology matches the sound to a database of digital fingerprints, and if a positive match is made the application then pushes this as a notification to the device. This can be as a vibration, a graphic alert or a combination of them both. 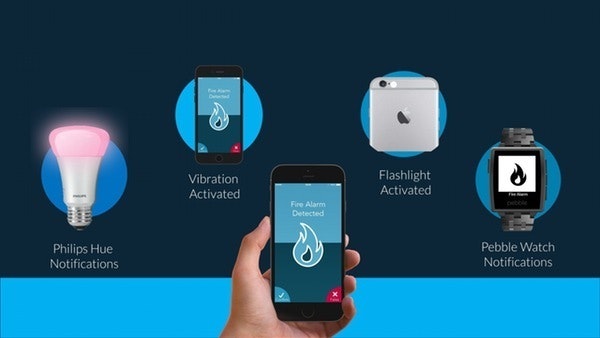 We have a live Minimal Viable Product (MVP), live and operational on both Apple and Android platforms.

We have secured two indicative offers of institutional investment from two leading regional venture capital funds, hence the reach out to Seedrs investors to seek the £50,000 angel match we require to crystallise this early interest.

Whilst young, the founding team is academically gifted and this intellect and the skills involved in the creation of Braci have already been recognised in several ways.

From acceptance onto the Sirius programme (a programme run by UK Trade and Investment (UKTI) helping international graduates with high growth business ideas to set up in the UK), to graduation from a leading technology accelerator to acceptance on NatWest’s Entrepreneurial Spark programme and a recent request to present at ‘Pitch at the Palace’, the founding team have been adept at winning coverage and interest in their idea. We seek funding to commercialise our MVP (which has patents pending and has been subject to widespread positive early publicity and pilots).

At this early stage we will focus our sales strategy on one focused market (selling B2B to the public sector and housing associations where customer need is driven by regulatory need).

We have already received two indicative offers totalling £100,000 in venture capital money from two reputable institutional funds. This supports a pre money valuation of the company and its technology at £500,000. The institutional investors have identified an experienced business mentor who will join the business on completion of this investment round with an explicit brief to focus the team on a robust sales and marketing strategy.

In order to draw down this venture capital money and complete this funding round, we need to secure a match of at least £50,000 from private investors, hence this application to Seedrs investors to share in our exciting journey.

Note: the company has one loan outstanding to Creative England as part of the International Healthcare Fund. The funding was for £50,000 repayable through a 50% revenue share on the gross margin, and hence will not be re-paid out of proceeds of this investment round.

Summary:
Braci has developed a technology solution capable of detecting a wide range of sounds which can then be pushed as easily understood sensory and visual notifications through smart devices back to the wearer/user.
See Campaign: https://www.seedrs.com/braci
Contact Information:
Juma El-Awaisi
Anwar Almojarkesh
Amr Wanly