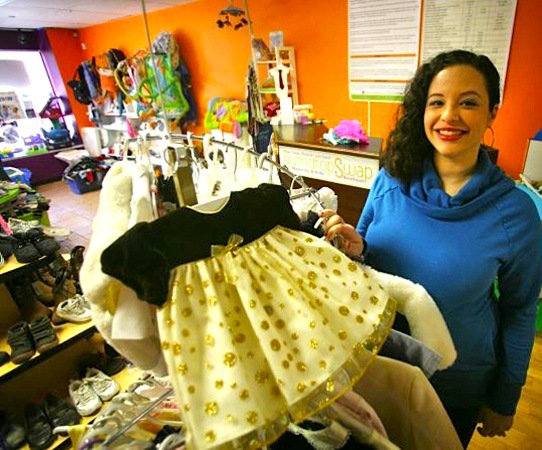 I was born in Cleveland, OH and grew up in Albany, GA. I come from a family of creative people (artists, writers, performers) so they were not surprised when I chose to pursue art as a career. I graduated from the Savannah College of Art & Design in 2002 with a plan to be a children’s book illustrator. I moved closer to NYC to be near the major publishing houses. While I submitted art samples and waited to hear back from publishers, I taught myself how to do graphic design and found a job at a clothing catalog company. There I learned about fabrics, predicting fashion trends and customer acquisition and retention. I received on-the-job training in digital design there so when that company moved out of state, I was hired as the Design Production Manager for a furniture company. In my two years there, I learned a lot about marketing, the printing process and how the world of retail works. Little did I know then how these skills would serve me well as a entrepreneur!

I became a mom in February of 2008 and when the Recession hit hard later that year I was unemployed with thousands of other Americans. I tried to find work for months but it was hard to compete for entry level jobs with colleagues that had years of experience over me. I noticed that things were accumulating around my house that my daughter had barely worn or used. After speaking with other parents I knew, it was clear to me that I wasn’t the only one frustrated with my options. I could donate the things to charity but that wouldn’t help me get what she needed now. Why couldn’t I just swap a too-small item for something similar in the next size up? Aha! That’s when Gumdrop Swap was born.

My son was born in 2013. Running a business, being a wife and mother of two busy children, is not easy. But my business allows me to provide my children with everything they need. I know that they will grow up and be proud of what I have accomplished. I want them to dream big and know that doing things the right way, helping people and seeking the support of others is the way to accomplish their goals. I envision franchising my company and Gumdrop Swap becoming a household name. Your loan will help me to work towards that goal.

In 2010, Gumdrop Swap opened in Bridgeport, CT – a city striving to reinvent itself. Like other post-industrial port cities, (Detroit, Cleveland, etc) people and businesses vacated the city as industrial jobs dried up. I saw potential where others saw hopelessness. Using a few thousand dollars I had saved, I started in a 545 sq ft retail space because it was all I could afford. I wanted to start small and be sure that my idea was a viable business. In a little more than two years, I had built a steady following of customers and swappers without doing any traditional advertising. I used social media and reached out to blogging moms to help spread the word about my unique store. By the summer of 2012 it was clear I had outgrown that retail space. I moved my business to a larger storefront with better visibility in the same building by October of that year. It tripled my square footage and put Gumdrop Swap on Main St instead of being hidden inside the building. My foot traffic increased but with higher overhead, I was still breaking even financially. Over the years, customers complained about the limited metered parking in the historic downtown area. It was difficult to load and unload on a busy street, especially with kids in tow. So, in early 2015, I decided to move again. This time to a building with its own spacious parking lot in the neighboring town of Fairfield, CT.

What is the purpose of this loan?

I’ve come this far by reinvesting every dollar earned back into the business. I do not draw a salary or have any paid employees. I’ve managed this long with the support of my husband, mother, friends and volunteers. I save money by using reclaimed fixtures (read: dumpster diving) for displaying merchandise. I have grown over the last 5 1/2 years by word-of-mouth referrals and social media. The new location means I need to do a big marketing push. Many of my old customers don’t know that I moved. This loan would mean I could afford to do a tv commercial to run on the local cable network. My research shows that a simple tv commercial to run at strategic times on a few choice cable networks is the ideal way to reach my target audience: middle class families with children and expecting moms. I thank you in advance for your support!

Summary:
In 2010, Gumdrop Swap opened in Bridgeport, CT – a city striving to reinvent itself. Like other post-industrial port cities, (Detroit, Cleveland, etc) people and businesses vacated the city as industrial jobs dried up. I saw potential where others saw hopelessness. Using a few thousand dollars I had saved, I started in a 545 sq ft retail space because it was all I could afford.
See Campaign: https://zip.kiva.org/loans/17298
Contact Information:
Gabby