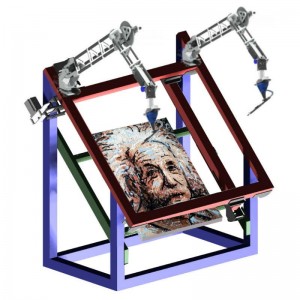 November 12, 2015 – Tysons Corner, VA – With just over a week left to go, Pindar van Arman is delighted to announce his campaign has reached it’s goal on Kickstarter. The robot, powered by a blend of artificial intelligence and human interaction allows for the creation of some truly unique works of art.

During the course of the campaign, bitPaintr has been featured by VICE as part of their creators project, artnet news, Discovery.com, across the United States and the wider world. Furthermore, Pindar Van Arman has been interviewed for episodes to be aired shortly on the Discovery Channel, CBS, and Washington DC’s WUSA9.

The robot is a high-tech tracing machine that does away with the need for pen and paper. The tracing is done on a tablet which the robot paints with a paint brush. Each portrait begins when a photograph is uploaded to the robot. The photograph then appears on a touchscreen where lines can be traced over it. Whenever a line is drawn, the robot dips its brush into paint and replicates the stroke on a canvas.

While this level of human interaction is a new feature of Van Arman’s bitPaintr, the mechanics behind most of his robots are the same. He insists on building them to paint with a brush on canvas. When asked why he prefers this approach he responds:

“Friends have joked with me that I invented a really slow, really bad printer, a Rube-Goldberg device of sorts. Instead of creating photorealistic replicas in seconds like a printer, my robots paint with a brush over the course of hours, make loads of mistakes, and splatter paint everywhere. It’s a mess, but a charming mess made by a robot trying to make art the way humans do. It’s ridiculous.”

Those interested in having their portrait painted by a robot or learning more about upcoming exhibitions can visit vanarman.com or check out bitPaintr on Kickstarter (https://www.kickstarter.com/projects/396659733/bitpaintr-a-portrait-painting-robot-by-pindar-van)

Notes to the Editor

Pindar Van Arman is a technology artist that focuses on the creation and design of painting robots. Over the past ten years, his artwork has been featured in multiple exhibitions across the country.

Highlights include a solo show at the Cartoon Network Headquarters, featured placement on the main stage of Google’s Made-With-Code Launch Event, and being shortlisted in Google’s International Dev-Art Competition.

He is based in the D.C. Metropolitan Area and is currently preparing for exhibitions in Washington D.C. and New York City.

If you would like more media images and information about bitPaintr, or to schedule an interview with Pindar Van Arman please contact any of the following: