You are here: Home  /  icnw  /  New Innovative Painting Robot Will Let Anyone be a Portrait Artist
icnw

New Innovative Painting Robot Will Let Anyone be a Portrait Artist 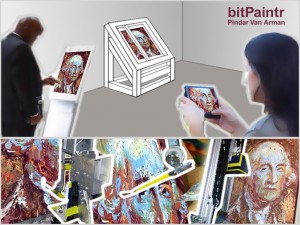 October 28, 2015 – Tysons Corner, V.A. – Pindar Van Arman is seeking volunteers to be painted by a machine for his latest interactive art exhibition. At the center of his project is bitPaintr, an artistic robot that paints with a brush on canvas. Specifically, it paints portraits using a combination of audience participation and artificial intelligence. The robot is already fully functional and Van Arman is seeking 50 volunteers that would like their portraits included in an upcoming traveling exhibition with the interactive robot.

The robot is best described as a high-tech tracing machine that does away with the need for pencil and paper. Instead, the tracing is done with a touchscreen tablet and robotic paint brush. Each portrait begins when a photograph is uploaded to the robot. The photograph then appears on a touchscreen where lines can be traced over it. Whenever a line is drawn, the robot dips its brush into paint and replicates the stroke on a canvas.

This innovative approach goes beyond replacing the pencil and paper. It even does away with the need for a human. When no one is tracing, the robot will attempt to auto-complete the portrait by painting on its own..  It does this by comparing the photo being traced to the painting’s progress and performs strokes wherever it detects differences. Some would argue that this is similar to how the typical portrait artist works. Portraits produced by this machine are a complex collaboration between the human and the robot’s own artificial intelligence. It is not uncommon for the two to influence each other throughout the creation of a portrait.

While this level of human interaction is a new feature of Van Arman’s bitPaintr, the mechanics behind most of his robots are the same. He insists on building them to paint with a brush on canvas. When asked why he prefers this approach he responds

“Friends have joked with me that I invented a really slow, really bad printer, a Rube-Goldberg device of sorts. Instead of creating photorealistic replicas in seconds like a printer, my robots paint with a brush over the course of hours, make loads of mistakes, and splatter paint everywhere. It’s a mess, but a charming mess made by a robot trying to make art the way humans do. It’s ridiculous.”

Those interested in having their portrait painted by a robot or learning more about upcoming exhibitions can visit vanarman.com or check out bitPaintr on Kickstarter (https://www.kickstarter.com/projects/396659733/bitpaintr-a-portrait-painting-robot-by-pindar-van)

Notes to the Editor

Pindar Van Arman is a technology artist that focuses on the creation and design of painting robots. Over the past ten years, his artwork has been featured in multiple exhibitions across the country.

Highlights include a solo show at the Cartoon Network Headquarters, featured placement on the main stage of Google’s Made-With-Code Launch Event, and being shortlisted in Google’s International Dev-Art Competition.

He is based in the D.C. Metropolitan Area and is currently preparing for his next exhibition as an invited Technology Artist at Kshitj 2016 in Kharangpur, India. Following India, he is working towards exhibitions in Washington D.C. and New York City.

If you would like more media images and information about bitPaintr, or to schedule an interview with Pindar Van Arman please contact any of the following: