You are here: Home  /  icnw  /  Shuttersong – Add your favorite music or voice to any photo and share with friends.
icnw

Shuttersong – Add your favorite music or voice to any photo and share with friends.

Shuttersong captures your moments more competely than any photo sharing app on the market – by adding sound to your photos, Shuttersong allows you to create a more personalized experience for your friends, family, and social networks.

Experience a Shuttersong for yourself by clicking the play button below:

Over the past few years, short videos on Vine or Snapchat have exploded.  Using video to share the little moments that make every day special is a beautiful premise, but in reality, photos still dominate because they are easier to use and quicker to post. Most users don’t have time for that kind of video-making! 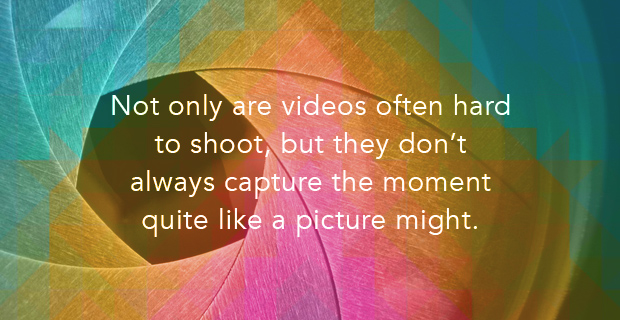 If you own a smartphone, chances are you already take a lot of photos throughout the day… but sometimes a photo by itself just isn’t enough.  Where video becomes too much, and photos offer too little, Shuttersong hits the sweet spot.  We allow users to add a voice message, music, or any other sound clip onto their photos and create a more shareable experience.

Shuttersong is richer and more manageable than a video, while letting you add to your favorite moments in a snap! Whether you want to add goofy sound effects or a heart-felt song, we let you enhance your favorite photos and memories with the soundtrack of your choice. And with its own social networking features, Shuttersong attracts and engages users on a daily basis. 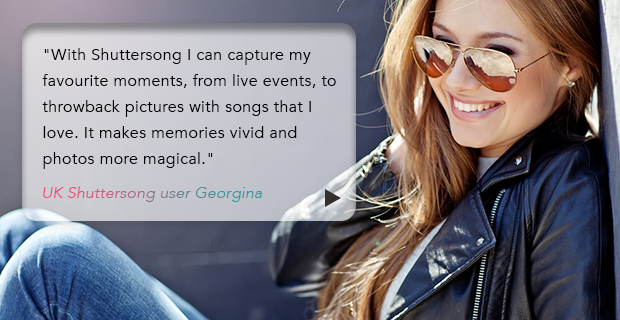 Sound fun? You bet it is. Music and photography are the two main passions of our target audience demographic and our ability to match the two offer a unique value proposition. Shuttersong is so easy to use. Just go into the app and choose any photo on your phone or take a new one, then add whatever sound or song you want to go with it!

Want to tell your significant other you love them while you’re on vacation? Snap a photo of the beach and record a short message to that special someone. Want to add some rock-and-roll flare to a glamorous selfie? Pair your favorite song with your photo.

That’s why we help you to bring the two together on the most innovative photo-sharing social network out there right now! Enjoy the sound-immersion of a video without the hassle of recording and editing it.

So what exactly makes Shuttersong different than a video? And how exactly do you add sound to a photo? Well, patented technology makes that answer easy:

One of the key elements of Shuttersong is that we’re not trying to be a video-making app. When you add sound to your photo, the app doesn’t change the file type, so your photo is still a photo and not a movie file.

The app creates a compound file that attaches the non-image data, or the sound (and potentially other data), to your JPEG file. 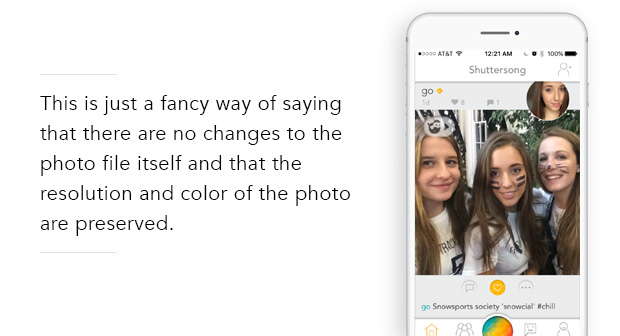 Because we don’t change the photo file, your photo moment is saved to the Shuttersong app itself as well as any other social media site you might want to put it on. You won’t have to deal with long loading times or your file not playing properly, just share and enjoy.

We’ve also made sharing your audio-enhanced photos easy and fun as well. You can build a profile, find and follow friends, comment and like other people’s Shuttersongs and enjoy content in our public community. In November we’ll be adding “gamification” features to the app to inspire competition, drive greater engagement and reward frequent users.

InfoTrends, a leading photo and imaging analyst firm, described us as a leading example of “intelligent photography,” an emerging market segment where image quality is highly important and primary use is social sharing. No one else has done anything like this, and we’re very excited to share it with you! 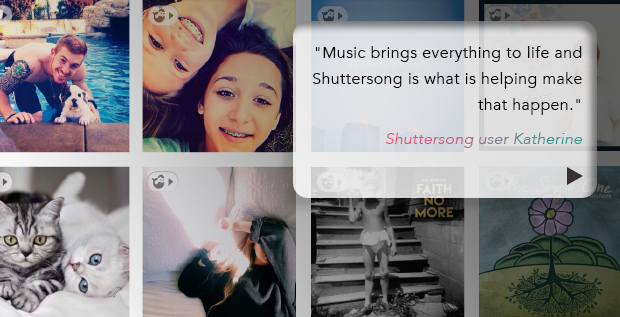 We’re so much more than photos now! Shuttersong is a place to meet new people, share memories with friends, and add a little magic to those moments in your life when a static photo just won’t cut it.

Our 2015 marketing programs have validated the potential of Shuttersong. Paid acquisition and affinity marketing have delivered tremendous results to date to enable us to generate over 235,000 installs.

Our iOS app has been designed specifically to leverage the best of all recent social features. We’re in the final development stages of bringing the existing Android app up to the iOS standard and our roadmap includes updating our Windows app to a comparable feature set in early 2016. We’ve worked closely with Microsoft from the very beginning and we were named one of their strategic apps in 2015. All of our apps use a highly-scalable, common back end which runs on Azure. We can easily accommodate millions of users with the infrastructure and administration we have in place.

We’ve generated interest from incredible brands and individuals. Musicians have been especially excited about the potential of Shuttersong to drive their success. We have relationships with PR agencies in the US, UK, and Germany that have helped us generate awareness all over the world!

We have partnered with significant influencers such as YouTube sensations Jack & Jack who have been singing Shuttersong’s praises to their 16.5 million followers, Pledge Music which is the #1 fan community for music, and Hispanic beauty vlogger Mariale . We’re in talks with several record labels about using Shuttersong to promote their new releases.

We have partnership agreements in place with American Greetings and Bare Tree Media to bring our users fun and unique content. Bare Tree Media licenses the digital rights to well known character brands such as Hello Kitty, Garfield, The Three Stooges, Charuca, KISS and many more. With our iOS release in November that features gamification, rewards and gaming features we’ll be expanding our relationships with these two digital content powerhouses.

We have a full roadmap of viral features to add to the app, as well as fun features like competitions, points for activities, app personalization and game features. We’ve already started testing advertising delivery in user’s timelines to give us a monetization path early on. All of our current investors believe in our vision and have doubled or tripled their original investments.

There’s no reason that we can’t break 1 million users in 2016, but we need your help if we’re going to do this! 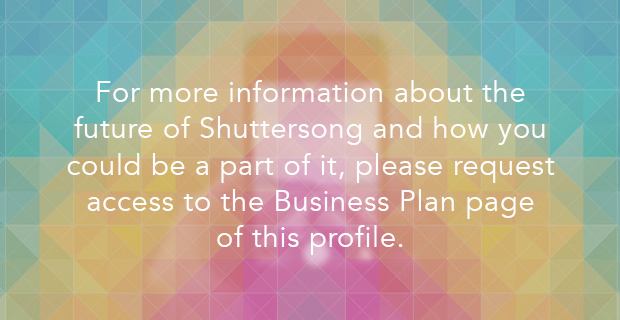 A technology marketing executive since the 70s, William has held senior marketing positions at Gomez, SmartBear, ServiceCEO, and Marketsoft. He has also been with videoconferencing leader Picturetel, global IT education leader Global Knowledge and Prime Computer. William has also launched 2 other startups: ThinkForMe and Photographic Data Systems.

He came up with the idea for Shuttersong when he found a small frame with a picture of his son along with a recording of his voice, and wanted to bring them together! Able to quickly raise capital for the startup, he was profiled as an example of a successful “late in life” entrepreneur by the Financial Times.

John has more than 20 years of brand marketing experience. He has developed successful strategies and campaigns for prominent brands, including Captain Morgan Rum, Procter & Gamble, Putnam Investments, John Hancock, and many others. He specializes in sports and entertainment-based marketing, and works with the music industry as well as our other partners to create connections that drive action and revenue.

William and John are supported by a world-class outsourced development team that has been involved since the beginning along with globally-recognized agency Carbone Smolan in New York that continually evolves the UI.

Gil is a former Partner at Accenture and has deep experience in enterprise systems, ad-tech and corporate governance. As our largest individual investor Gil has planted his flag firmly in Camp Shuttersong.

Vincent is a co-founder of WebLoyalty and helps to guide our advertising technology efforts.

Julio is a Partner at Morgan-Lewis in Boston and represents the interests of a core group of our shareholders.

Wendy brings over 30 years of product management and marketing expertise to the board. She’s built high performing teams in small companies (SiteScape, OrderTrust, and Wavefront) and large ones (Netezza, Sun, and PictureTel) alike.

An expert in ad-tech, Paul was the CEO of Brilig and Snickelways Interactive and has been a key figure in the NY interactive industry since the 1990s. Paul provides guidance in deploying Shuttersong technology in advertising applications.

Robert is an SVP of YP.com and was a senior executive guiding AOL Commerce. He works with the management team to develop content marketing strategies and has been instrumental in connecting us with big brands.

Peter is the CMO of Nuance and helps guide our use of emerging technologies such as speech recognition.

Janet was the first CMO of Constant Contact and brings a deep understanding of consumer behavior to Shuttersong.

Joichi is the Director of the MIT Media Lab

Al is Global Director of Application Support for Thomson Reuters

Summary:
Shuttersong captures your moments more competely than any photo sharing app on the market – by adding sound to your photos, Shuttersong allows you to create a more personalized experience for your friends, family, and social networks.