You are here: Home  /  icnw  /  Tartoff – The only oral hygiene product that completely removes and prevents tartar
icnw

The most advanced toothpastes on the markets today can, at most, “fight” or “protect against,” but no one can claim to completely remove and prevent dental tartar — until now. 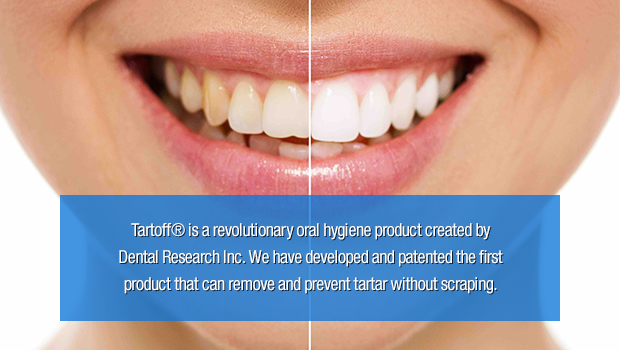 We have developed, consumer tested, and patented a product that major companies have spent millions of dollars over the past fifty years in unsuccessful efforts to create. Tartoff® can save hundreds of millions of people worldwide from gum disease, early tooth loss, and other related health problems.

Dental tartar (hardened plaque) is the biggest cause of many serious health issues including gum disease and early tooth loss, and is even a contributing factor in diabetes and heart problems.

Dental plaque is a soft, sticky film, composed of millions of micro-organisms that forms on the teeth. If not removed, it hardens into a calcified substances called tartar. Current toothpastes on the market can only remove plaque, not tartar. 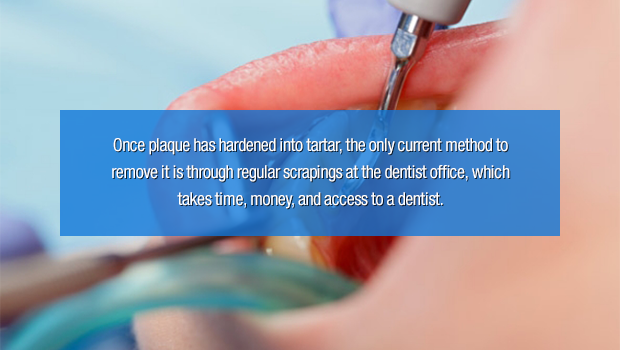 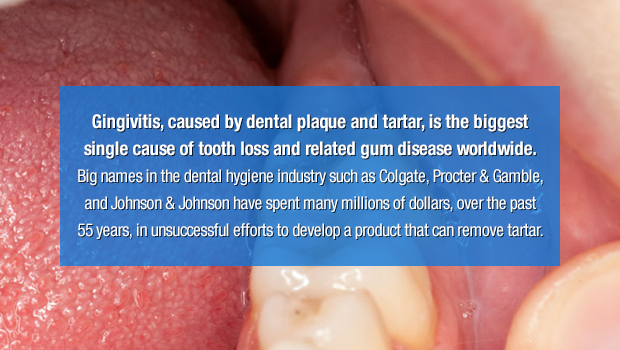 However, the best that they have been able to come up with are products that “fight tartar buildup” or “protect against tartar.” Even using the best of these products twice daily with perfect brushing form will lead to tartar buildup that must be scraped off mechanically by a dentist or dental hygienist.

Our team has had decades of experience in developing and marketing consumer products, including oral hygiene products. Our newest product, Tartoff®, will change the industry. 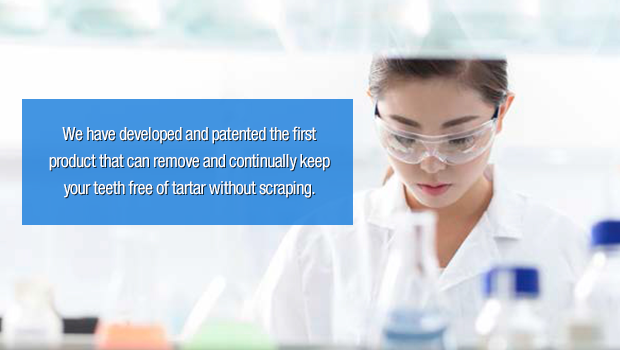 It can be incorporated into toothpaste, tooth powder, mouthwash, chewing gum, lozenges, and other products. It also tightens the gums and strengthens the enamel.

We’ve tested Tartoff® with over one hundred people and it has been shown to not only inhibit the growth of plaque and tartar, but to actually remove plaque that has already hardened into tartar and strengthen the gums. This not only stops mouth diseases, but helps prevent diabetes and heart problems as well since bacteria that starts in the mouth can spread throughout the whole body. There is also some evidence that Tartoff® can repair damage to bones supporting the teeth. 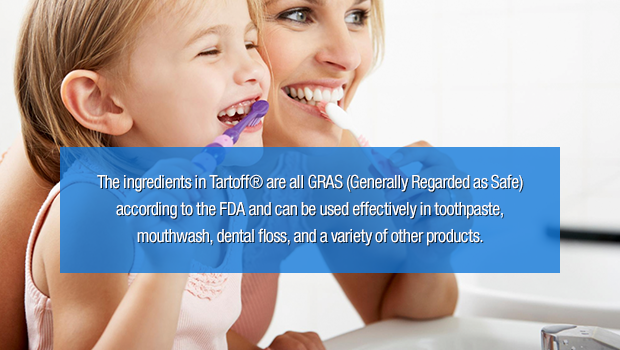 The major oral hygiene companies have spent many millions of dollars in unsuccessful efforts to develop a product that can remove tartar. If we give one an exclusive license, it will enable them to introduce a line of superior products and become the dominant leader in the fast growing, $31 billion worldwide oral hygiene market.

With Tartoff®, the need for hands-on, labor intensive, expensive, and time consuming dental scrapings are done.

Check out some of the key features of Tartoff®.

The simplest form of our product is a powder, but it can be incorporated into many formulas. It can easily be turned into a paste or gel for toothpaste, a liquid for mouthwash, or an adhesive to floss.

Our focus is finding a company who will incorporate the Tartoff® formula into all the major forms of dental hygiene. For example, if Colgate were to become an official licenser of Tartoff®, you would see Colgate toothpaste +Tartoff® or Colgate mouthwash +Tartoff®, or something to that effect. You can expect to see toothpaste, mouthwash, dental floss, lozenges, and chewing gum on the shelves of stores across the world that contain Tartoff®. The flavor or taste will be just like any other toothpaste or mouthwash — that is, companies can flavor it any way they want.

Tartoff® combines with natural saliva, thereby increasing the amount, and chemically dissolves the bond that holds tartar to tooth enamel. In the process, that same mixture of Tartoff® and saliva strengthens your enamel and tightens gums.

We currently hold two patents with one more on the way:

Eventually, we will patent all forms of Tartoff®, from dental floss and chewing gum, to antiseptic gargles, breath fresheners, lozenges, even veterinary products.

Tartoff® has been approved for human clinical studies by the Institutional Review Board of The Forsyth Institute. Their results will be publishable in a leading peer reviewed journal and recognized by the FDA. We have already had over 100 people test Tartoff tooth powder with excellent results.

Quotes From Those Tests 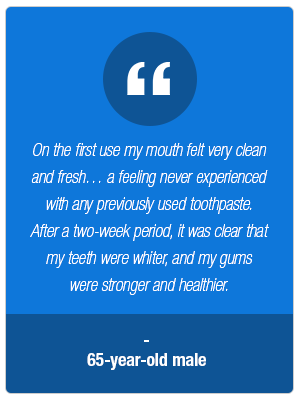 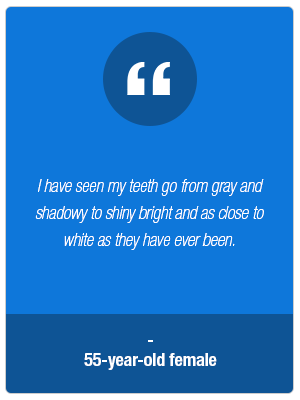 Also according to the FDA, Tartoff® ingredients are all GRAS (Generally Regarded as Safe) and can be used effectively in any form of oral hygiene.

Up next, we need to confirm our own test results by financing a double blind study by the Forsyth Institute, the most highly regarded independent research organization in the oral hygiene field.  Their results will be publishable in a highly regarded, peer reviewed journal and recognized by P&G, Colgate, J&J, American Dental Association, FDA FTC and other pertinent authorities.

Bob is a former Brand Manager of Crest toothpaste who, as Manager of New Products at P&G, participated in the development of Scope mouthwash, Pampers, and other major brands. As a marketing and new product consultant for the past 30 years he has served a variety of companies ranging from startups to major corporations and has often assumed executive positions to implement recommendations.

He most recently served as founding CEO of Eggland’s Best, for eight years, creating and introducing the first premium quality, premium priced egg brand. Mr. Fuhrman has an MBA from Harvard, where he was offered a faculty position on graduation.

A note from Bob:
Early in my career I had the good fortune, as Brand Manager on Crest toothpaste, to work on a product that saved millions of kids from cavities and also generated major profits for P&G. With Tartoff®, I have the good fortune again to work on a product that will deliver health benefits to hundreds of millions of people, as well as extraordinary financial returns for investors. In a way, my career has come full circle.

As I was in on the decision at P&G to make the development of a tartar removing product, the number one development priority for the personal products division, I was well aware of the potential as well as the difficulties and failures at P&G and other companies. When two men brought me a product, developed essentially in a garage, that they claimed could remove tartar, I was very skeptical. I probably only tested it as quickly as I did because I was personally a serious tartar sufferer and could easily test it on myself. The amazing results blew me away and I quickly had several other people test the product.

Our simple, innovative business strategy and licensing plan grew out of my personal experience in the consumer product field. Having worked on many new consumer products, and been exposed to many others, I was well aware of the costs, risks, time, and difficulties that startups face in building an organization and infrastructure. As founding CEO of Eggland’s Best eggs, I had come up with a licensing strategy that proved highly successful. Eggland’s Best is, far and away, the nation’s leading egg brand, with annual retail sales in excess of $700 million.

Having been on the other side of the fence, I was also well aware of the fact that none of the major companies would take us seriously without a double blind test by a highly reputable independent research organization, as well as patent protection. The $475 million that the inventors received for the Crest spin brush helped convince me that licensing was the right approach for Tartoff®.

Charles is an engineer and inventor with successful product development and business experience in a broad range of fields. He has designed countermeasure systems for military use as well as optical scanning systems used for cell identification and cervical cancer diagnoses. As Chief Engineer of Acoustica Associates, he managed the development of propellant utilization systems for use on intercontinental ballistic missiles.

In association with the late William McGowan, founder of MCI Corporation, Mr. Leonhardt formed Powertron Corporation, a developer and manufacturer of a broad range of ultrasonic equipment widely used in industry, aerospace, military, and the medical and biological fields. He also served as President of Southern Associates Inc., a subsidiary of Powerton, employing 125 engineers that supported NASA with engineering services.

Leonard is a CPA, MBA, and President of the Green Group, a tax and financial consulting firm. He also serves as Professor of Entrepreneurship at Babson College where he has taught over 1,200 business students how to handle the real world of startups.  Len has been personally involved in over 40 businesses in a wide variety of industries including a number of highly successful startups, such as SoBe and Blue Buffalo. He currently or previously served on a dozen boards including the publicly held Cerveo, Inc and the non-profit Jeremy’s Heroes. He is a trustee of Babson College.

Summary:
The most advanced toothpastes on the markets today can, at most, “fight” or “protect against,” but no one can claim to completely remove and prevent dental tartar — until now.
See Campaign: https://www.fundable.com/tartoff
Contact Information:
Bob Fuhrman
Charles Leonhardt
Leonard Green