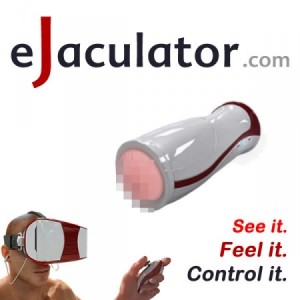 October 20, 2015 – Movies, books and men’s hopes have predicted and anticipated for years a Virtual Reality machine that would enable the average guy to experience the pleasure and excitement of passionate sexual encounters with the most gorgeous women from the privacy and comfort of home, and without the associated risks of sexually-transmitted diseases.
The future approaches quicker most expected: What seemed like science-fiction not very long ago has been made reality today.

Yes, the world’s first and only Virtual Reality adult experience is here, and it is called the eJaculator. Combining the senses of sight, sound and touch with the ability to control the details of every encounter, the eJaculator is the technological breakthrough that is going to revolutionize time and days spent at home and while traveling for millions of men around the world.

What’s more, the entire experience is completely free once you buy the device – a team of professional adult content producers is already working on creating POV content and expect to have over 1000 fully-integrated videos by the end of 2016 which will be accessible to all owners of the eJaculator whenever, wherever and as many times as they like.

Built just like other popular video streaming sites, eJaculator’s video service will allow users to search, choose and favorite videos. They will be able to follow a particular model, category or keyword and be instantly notified of updates as they become available.

Every story line available will be fully customizable from beginning to middle to end – users compile the elements as they like and then experience the scenes immersed in a hyper-realistic VR world, where sight, sound and touch mimic reality; in the words of one beta tester, he claims, “It feels like I’m next to her.”

Not only a pleasure device, eJaculator will help you better your performance for use in virtual reality and in real life. Incorporating several stamina-increasing programs that hone your abilities and staying power, the eJaculator is also the world’s first and only Virtual Reality love trainer.

The full kit comes with the eJaculator device that is worn on the organ, a VR headset, a remote control (with battery) and a silicon sleeve.

Users need only to download the associated app and connect it to the eJaculator. The main device is made of FDA-approved silicone and connects via Bluetooth 4.0. The headset is extremely light at 340 grams and can accommodate smartphones with screens of up to 6 inches.

Made possible by a team of individuals dedicated to changing the way individuals experience pleasure, the eJaculator has rocketed past its original $48,000 USD funding goal on Indiegogo.

Considering its funding continues pace at its current momentum–the project will easily reach over $100,000 before the Indiegogo campaign comes to an end. As of Thursday October 15, 2015, the Indiegogo crowdfunding for this product had cleared over $70,000 USD with 12-days remaining for backers to contribute.

The initial launch of the campaign included a distributor pack at $2,500.00 USD and incredibly, this was the first backer reward to sell out. There are still “Early Bird” units available starting at $125.00 USD, and the next price tier starts at $150.00 USD.

The video the founder, Steve Csanyi, created for Indiegogo has taken on a life of its own, going viral with over 1,000 views per day (at last check 180,000 views) since being uploaded on Youtube only two weeks ago; the campaign video caught attention on sites like Reddit and was shared on twitter over 10,000 times.

For those who are are into funny, the video may be a meme worth taking a look at: one commenter to the video with the name SuperGamer87 said, “I laughed the whole way, and died at the Neil Armstrong sound bite.”