To all the golfers and caddies out there,
You listening?
Let’s hit the green together. You, me, and some green. Trust me, one of you are in for an incredible Cinderella Story.
My brothers and I put on a Murray Bros’ Caddyshack Charity Golf Tournament every year and this year – I want you to play with me.
Our tournament’s at the World Golf Village in St. Augustine, Florida. If you win, we’ll play some golf together on April 21st and 22nd next year. You’re still listening, right? Because we’ll also fly you out and put you up in a hotel. Those are big details.
We won’t just be playing golf, either. That’s not how the Murray Bros do it. You’ll also be invited to the Pairings Party + Live Auction on the night of the 21st and the Awards Party on the 22nd. We’ll be playing golf and partying together for two straight days. Like I said – a Cinderella Story.

If you’re not a golfer, don’t let that stop you. I’ll show you some tips and even if you just come to hang out with me on the course and for the parties – it will be worth it.

All I’m asking is that you make a small donation — even just $5 — so that we can raise money to help provide life-saving services to communities all across the country, but you can look to the right to read more about that.
Get ready though, ‘cause all I hit are hole-in-ones. If you win this experience, just smile and try to keep up.
–Bill

In 2001, Bill Murray and his five brothers – chef Andy, actors Brian, Joel and John, and financial executive Ed opened Murray Bros. Caddyshack at World Golf Village, home of the World Golf Hall of Fame, in St. Augustine, Florida.
Along with the opening of the restaurant, the brothers created the Murray Bros. Caddyshack Charity Golf Tournament with the mission to partner with various charities to raise monies that provide medical services, educational programs, lifesaving equipment, and fundraising opportunities to better the lives in communities across the country.
Want to know a little more about the Murray Bros? The Murray brothers grew up on the North Shore of Chicago. Their parents, Ed and Lucille Murray raised nine children in a sweet little house on a leafy street in Wilmette, Illinois. As teenagers, the boys spent their summers working as caddies at the local private country club; it was that experience that inspired Brian Doyle Murray to write the classic golf comedy, Caddyshack. Some of the brothers participated in the making of the movie and can be found standing around in many of the funniest scenes.
Their passion for comedy and community building is why they use this tournament to raise money for community services all around the country. 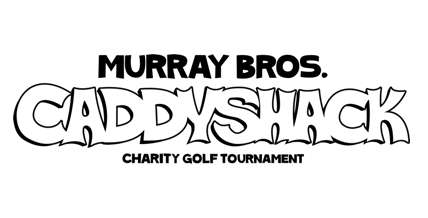